Women's History Month was March 2021; however, we were unable to get this posted before spring break. Please enjoy! 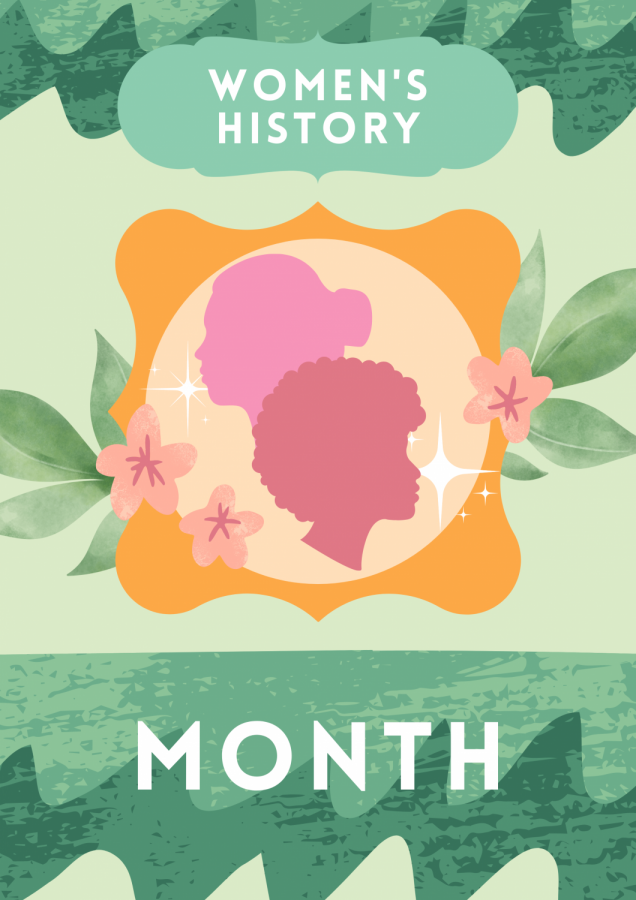 A graphic displays the words "Women's History Month" while showcasing the profiles of two women.

As we celebrate Women’s History month, it’s important to note the many influential women in both our history and our present. These women advocate for what they’re passionate about, proving the power of women in politics and in the workplace.

Shirley Chisholm was the eldest of four daughters born to immigrant parents. Her mother was a seamstress from Barbados, and her father was a factory worker from Guyana. Her parents taught her to value hard work, and along with her professors from Brooklyn College, they assured her that she could do anything. Many of the mentors in her life said they wanted her to become a politician. Though she had graduated cum laude and had received countless awards for her work on the debate team, Chisholm anticipated her blackness and womanhood as a “double handicap” in the political field. She would go on to prove herself wrong. After earning her masters at Columbia University, Chisholm joined local chapters of the League of Women Voters, NAACP, and the Democratic Party. In 1964, she ran for the New York State Legislature and became the second African American person to be elected. Next, she sought and won a seat in Congress. There, she introduced over 50 pieces of legislature that improved the state of racial and gender equality in America. She also took on the quest for the 1972 Democratic party nomination and taught at Mount Holyoke College until 1991. She was nominated to become the U.S. Ambassador to Jamaica, yet she declined due to her failing health.

Jan Morris was a Welsh journalist, travel writer, veteran, and historian. She was a member of the 1953 British Everest Expedition, documenting the journey of Sir Edmund Hillary and Tenzing Norgay as they scaled Mount Everest. Her timely coverage of this event thrust her journalism into the spotlight, and fame for her name followed. Today, the late Morris has over 40 published works, one of the most known being Conundrum, a 1974 memoir on her transition and experience as a transgender woman. Later, she became more associated with her Pax Britannica trilogy, a history in which she chronicled the social and political changes of the British Empire. Her work is critically acclaimed, as she has accurately documented historical time periods and detailed her international travels through writing often described as “reassuring, showing us that there are more ways of experiencing cultures than most of us supposed” (Anatole Broyard). Jan Morris contributed to history, journalism, and international perspectives in many unique and unforgettable ways.

Nawal El Saadawi was an Egyptian feminist, author, physician, and psychiatrist. Her career was defined by its devotion to the rights of Arab women—sexual, social, and political. Some of her many notable works translated to English include Memoirs of a Woman Doctor (1960), Women and Sex (1969), The Hidden Face of Eve: Women in the Arab World (1977), and Memoirs from the Women’s Prison (1984). Much of her work was banned by authorities in Egypt who found her messages religiously and politically offensive, resulting in her imprisonment for a time. As a healthcare worker and simultaneously an activist, El Saadawi’s occupation was threatened at many points, such as when she was terminated from her role of Director of Public Health at the Egyptian Ministry of Health for her feminist writings. Many such attacks were in response to her protesting female genital mutilation, which remains a common practice in Egypt. Also referred to as “female circumcision,” this is believed to preserve a woman’s modesty and is often performed on young girls. Such practices are physical examples of the largely patriarchal culture in El Saadawi’s home country. In A Daughter of Isis, El Saadawi wrote, “The written word for me became an act of rebellion against injustice exercised in the name of religion, or morals, or love.”

She was a lawyer and a women’s rights advocate who served as an associate judge of the Supreme Court from 1993 to her death in September 2020. Throughout Ginsburg’s early life, she encountered gender discrimination in the male–dominated environment that the law school at Harvard University provided. After university life, she served as the director of the Women’s Rights Project of the American Civil Liberties Union (ACLU), where she argued six landmark, successful cases on gender equality before the Supreme Court. A decade later in the 1980s Ginsburg was appointed to the U.S. Court of Appeals by President Jimmy Carter, where she served until appointed to the U.S. Supreme Court by President Bill Clinton in 1993. As a judge, she represented a strong voice for gender equality, workers’ rights, civil rights, and the separation of the church and state.

As a young girl, Rudolph contracted polio and scarlet fever often. Rudolph said, “My doctor told me I would never walk again. My mother told me I would. I believed my mother.” Not only did she walk, but Rudolph also became an international track and field star. At the height of her career, she was considered the fastest woman in the world and used her platform to educate others on social issues.

Angela Davis is an American activist, author, and educator. She has written or acted as co-author for over 10 books, including such famous titles as Women, Race, and Class (1983), Are Prisons Obsolete? (2003), and Abolition Democracy (2005). Davis continues to be an activist at the age of 77 on matters of race, class, feminism, and the prison industrial complex. She currently teaches at the University of California, Los Angeles, and has previously taught at multiple colleges and universities, including Stanford, Vassar, Syracuse, San Francisco State, U.C. Santa Cruz, and U.C. Berkeley. Davis was also appointed as the University of California Presidential Chair of African American and Feminist Studies in 1994. Through her occupation as a professional lecturer and educator, she has spoken in every U.S. state as well as abroad. One of her main principles in teaching is employing, in her words, “an intersectional approach,” and she has been successful with this in her long career of encouraging action against harmful sexist, racist, and classist institutions in America. Davis once famously said, “I am no longer accepting the things I cannot change. I am changing the things I cannot accept.”

Elizabeth Warren is a Democratic politician who ran in the 2020 Presidential Election primary. She was considered a top contender for the Democratic nominee at the time, but she suspended her campaign on March 5, 2020. She is a senior United States senator from Massachusetts, where she has worked since 2013, and she’s a former law professor. Her major political stances include raising taxes on the wealthy to aid the poor, increasing the minimum wage, abolishing the death penalty, free college, banning fracking, and many other democratic ideals. She has written or cowritten 11 books. Two books she cowrote with her daughter, Amelia Warren Tyagi, The Two-Income Trap: Why Middle-Class Mothers and Fathers Are Going Broke and All Your Worth: The Ultimate Lifetime Money Plan.

Alexandria Ocasio-Cortez, also known as AOC, is a Democratic member of the House of Representatives. In 2019, when she was elected at the age of 29, she became the youngest woman to ever hold a seat in the House. This also meant she was the youngest member of the 116th U.S. Congress, which was the most racially and ethnically diverse Congress yet (according to Pew Research Center). The 116th Congress elected 117 women, a record number until the 117th Congress of 2021-2022, in which she now participates. In addition to serving for the 14th District of New York, A.O.C. grew up as a third-generation New Yorker. In 2011, she graduated from Boston University with a Bachelor of Arts degree in economics and international relations. Currently, she serves on the House Committee on Financial Services. Her caucus memberships include the Pro-Choice, Congressional Bangladesh, Congressional Hispanic, Congressional Progressive, LGBT Equality, Quiet Skies, and Democratic Women’s Caucus.

Simone Biles is an American artistic gymnast who has a combined total of 30 Olympic and World Championships medals. Biles is the most decorated gymnast in America. She has won the most world medals in U.S. history (14) and the most world championship gold medals of any female gymnast (10). In the most recent Olympics, Rio 2016, she won four gold medals (team, all-around, vault, floor) and one bronze medal (beam). Biles is set to lead the USA gymnastics team once again in this summer’s Olympics in Tokyo, Japan.

Amanda Gorman and her two siblings were raised by her single mother. She was born with an auditory processing disorder and a speech impediment. Gorman is a 2020 Harvard graduate with a degree in sociology. In 2014, she was chosen as the first youth poet laureate in Los Angeles. She later went on to be named the National Youth Poet Laureate in April 2017. Also, in 2017, Gorman stated that she plans to run for president in 2036. At Joe Biden’s inauguration in January 2021, she made history as the youngest poet to read at a United States Presidential Inauguration, as she read her poem, “The Hill We Climb.” Her poetry and activism in general focus on feminism, oppression, marginalization, race, and the African diaspora.

Greta Thunberg is a Swedish activist, best known for her opinions and challenges regarding climate change. She began advocating for the climate in 2018, when she began a strike outside of the Swedish Parliament. Amidst the COVID-19 pandemic, Thunberg moved her “School Strike for Climate” protests online, hosting them digitally every Friday. Thunberg has inspired around 4 million people to become part of the 2019 Global Climate Strike, the largest in history. Greta Thunberg has debated with the former president, changed the minds of politicians, and even led the U.K. to pass a law eliminating their carbon footprint. Thunberg made her most persuasive events at the age of only 16. While also battling Autism Spectrum Disorder, Thunberg has inspired people throughout the world to take a stand and fight for what you believe, no matter what your struggles may be. She has been featured in movies, written books, and won awards. She even has her own television show. Thunberg was also named TIME’s 2019 Person of the Year.