Working on a political campaign 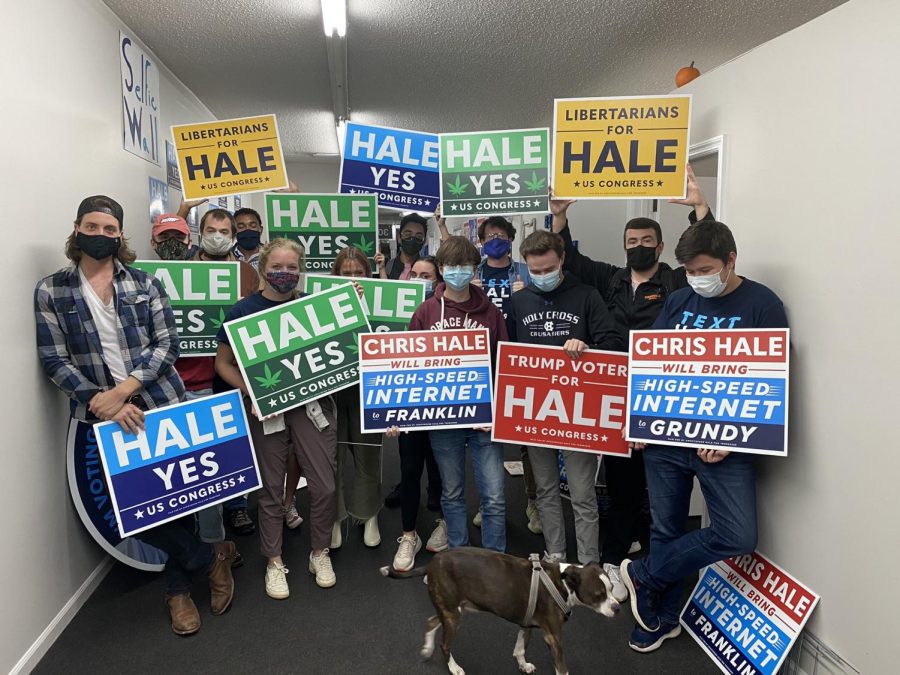 "This is my team. These are Hale’s Angels." (Christopher Hale)

Owen Farnsworth, Blackman 2020 graduate, had the honor of being one of “Hale’s Angels,” (Christopher Hale’s campaign team). Hale ran for the seat in the U.S. House of Representatives to represent Tennessee’s 4th Congressional District. Running against Scott DesJarlais, who gained 223,941 votes, Hale lost the general election with 111,885 votes: 66.7% DesJarlais to a 33.3% Hale.

“My job title was ‘Outreach Coordinator,’ and what I did in that job was to talk to [churches, unions, and things like that]. I would also coordinate with schools to get us things like interns,” said Farnsworth.

When it comes to politics, getting your foot in the door is important. Most people start small by working on campaigns. Other ways to become politically active are to become a poll worker, join an issues-based organization, and simply attend events for candidates (regardless of party).

“Working on a political campaign is pretty weird because when you get into politics at first, you expect that it’s going to be all these really intelligent people all around you who know exactly what they’re doing and don’t make a single mistake. You have to dedicate everything to your mind. What that meant most of the time was dressing in very relaxing clothing, making jokes all the time, and [watching movies together]. You relax your mind whenever you get the chance, so that way when you have to use your brain, you are on top of your game,” stated Farnsworth.

With politics, working hard is extremely important. You have to dedicate your heart and soul to it.

“I calculated the amount of time that I was at the office. I was at the office 98 hours a week, and I was always doing something. I can compare working on a campaign to working fast food: anytime you’re not working is time wasted,” said Farnsworth.

As with any job, you can learn valuable life lessons, some you might have already learned before, but had not realized the importance of.

“Generally, standardized testing sucks, but it gives you some important [life] lessons in teaching you how to be a better test-taker: get plenty of sleep the night before the test and eat a good breakfast,” stated Farnsworth.

Just because you have a plan set in place for the future does not mean you are stuck there. You can change your mind at any time, no matter how far in you are.

“I was accepted into MTSU for their aerospace engineering program, and I kind of had a little crisis, saying ‘I’m not really into planes that much.’ But I was thinking one night, ‘The thing that I do all day, every day, is politics.’ So, I went to my mother, and she said that a great thing I could do was go intern for someone, whether it’s just a campaign or someone who’s already in office,” said Farnsworth.

While politics have become increasingly more divided, when working on a campaign, your political alignment is unimportant.

“What is important to understand about politics is that people don’t care who you worked for, unless you’re a politician, they don’t care what party you associated yourself with. They just care that you can do good work and that you’ll be passionate in what you’re doing,” stated Farnsworth.

Working on a campaign is difficult and dedicated work, no matter if you win or lose. After the elections in 2020, there were many doubts about political positions, but after many counts of the votes, in January, President Joe Biden was inaugurated, along with many other political leaders.