2020 Blackman Football: A bounce back season to remember 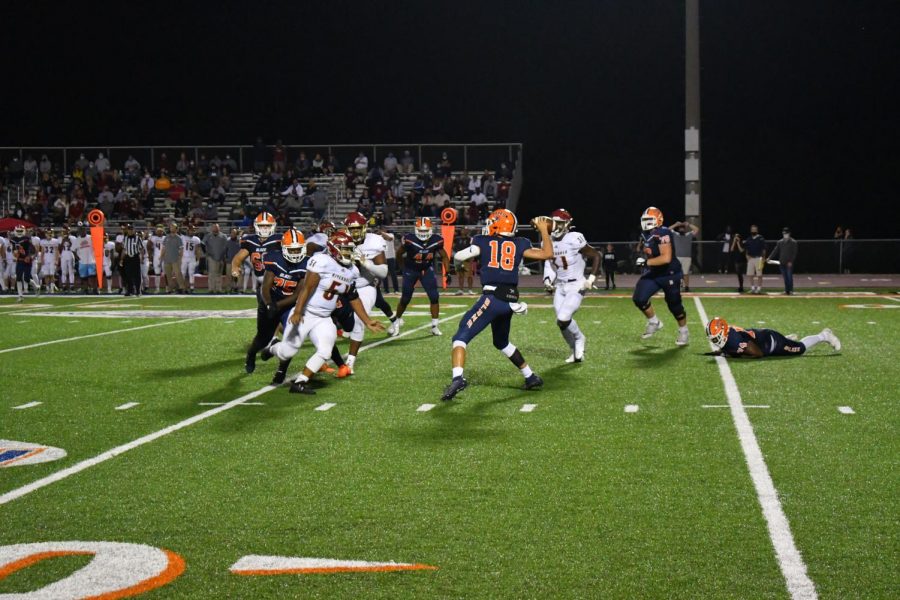 The 2020 Blackman Football Season was a story of redemption. Although the Blaze lost to Hendersonville 30-21 in the first round of the playoffs, halfway through the season not many people believed the Blaze would be in the playoffs. The Blaze battled through adversity all season.

The first half of Blackman’s schedule was difficult as the Blaze played state powers like Alcoa and Ravenwood. Things were looking down for Blackman as they lost five of their first six games leading to a 1-5 start. It became clear that Blackman would most likely have to win the rest of their games to make the playoffs.

Before that, Blackman had to worry about COVID-19 as the team was quarantined right before the Oakland game, which removed it from the schedule.

“COVID was really tough because we had to constantly be adjusting to the schedule, trying to practice differently, not getting to have spring practice so there was a ton we had to overcome,” said John McCreery, Blackman linebackers’ coach.

Blackman’s toughest test would be Cookeville the final of the three games. Coming in, Cookeville had a solid 5-3 record, and everyone knew it would be a close game to the very end. This is often evident when a playoff spot is on the line.

Blackman took an early 7-0 lead, but Cookeville struck back quickly. At the end of the first quarter, the teams were tied at 7-7. Turnovers were a  key in the game all night as Blackman threw a costly pick six with 6:02 left in the second quarter, which eventually lead to a 14-7 Cookeville lead at halftime. Blackman would once again have to find a way to bounce back from adversity.

The third quarter got off to a slow start for both offenses, but Blackman would eventually strike first in the second half as senior wide receiver Todd Lark hauled in a 34-yard touchdown catch from senior quarterback Drew Beam to tie the game at 14 with 5:18 left in the third quarter and that would be the score heading into the fourth quarter.

Lark continued to be a playmaker in the fourth quarter as he once again found the endzone this time on a 43-yard touchdown catch with 6:58 left in the game. However, senior kicker Jack Satterfield missed the extra point which kept the score at 20-14.

Cookeville scored on the ensuing possession and made the extra point, which gave them the 21-20 lead. Blackman was left with 4:10 left in the game to drive down the field. The Blaze got down into field goal range, and Satterfield was given a chance at redemption. He capitalized on the position by making the 26-yard field goal to give the Blaze the 23-21 lead.

It would be up to the defense to close out the win for Blackman. Cookeville got one first down but did not get much past that. On their second set of downs of the possession, Cookeville turned the ball over on downs thanks to a game clinching sack on fourth down by junior defensive end Kayvon Henderson.

“A sack to get into the playoffs that closed the game, it had to be like the biggest play I’ve ever made,” said Henderson.

Hardly anyone outside the locker room thought the Blaze had playoff potential after their slow start, but every player in the Blackman locker room believed in one another.

“We all believed in ourselves and knew our true potential as a team. We blocked out all the hate and got better as a program,” said Lark.

The brotherhood of the Blackman Football program was also a reason for the turnaround.

“My favorite thing about this team is my teammates because I love being around them and we’re all really close,” said senior wide receiver Mark Cooper.

As we close the book on the 2020 Blackman Football season, the biggest lesson that can be learned is to never give up no matter who tells you that you can’t do something.