The pressing issue of climate change 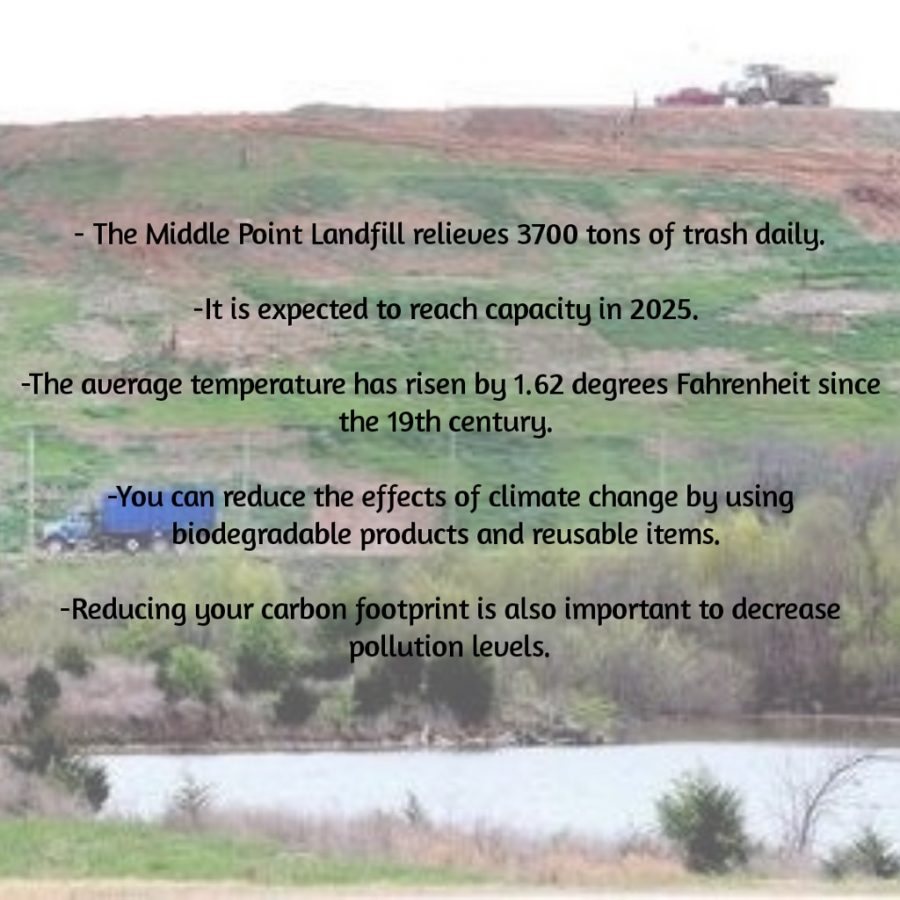 Photo Courtesy of the DNJ, Graphic by Emma Williams

Climate change is a source of controversy for many people. Many see it as a political issue—deriving from liberals—which leads many conservatives to believe it’s a hoax.

However, scientific research backs up that climate change is real, and it’s becoming more and more pressing each day.

The planet’s average temperature has raised 1.62 degrees Fahrenheit since the late nineteenth century. The top 700 meters of the ocean have raised 0.4 degrees Fahrenheit since 1969. Greenland lost an average of 286 billion tons of ice between 1993 and 2016. Antarctica lost around 127 billion tons of ice each year in the same time period, and its loss has tripled in the last decade. Evidently, temperatures are rising, making skeptics of climate change seem simply ignorant to the scientific truths.

What can we do?

While climate change is not something that’s completely preventable, there are steps we can take to help the environment. Recycling is not the most effective because the U.S. sends most of our recyclables to Southern Asia.

Instead, using reusable or biodegradable items are much more effective. Simple steps we can take are composting, using reusable bags, using a reusable water bottle, and thrifting clothes.

Using electronics to send documents rather than printing papers is another easy step to aide the environment. Bringing a reusable coffee cup to your favorite coffee shop is also an easy alternative to plastic cups. Currently, Starbucks does not accept reusable cups due to the Corona Virus, but in the future, bringing a reusable cup is a great alternative to plastic. Any way you can prevent waste helps landfills to not become as overwhelmed as they currently are.

Some steps the U.S. should take to help lessen the effects of climate change is to initiate a composting system that works alongside trash collection. This way, waste is lessened. The country should also stop sending our recycling to other countries. Instead, we should improve the systems we currently have.

Another idea would be to tax plastic bags. New York, California, Connecticut, Delaware, Hawaii, Maine, Oregon, and Vermont have taxed plastic bags. Tennessee should follow their footsteps and do the same. This would encourage shoppers to bring their own bags. Another step we could take would be to make eco-conscious, battery-powered cars more widespread and affordable. This would lessen pollution levels.

Systems have also been implemented to collect waste deposited in oceans. These systems should be increased and implemented across oceans nation wide. Boyan Slat created a machine that collects trash from oceans, and it aims to collect more than 50 percent of the Great Pacific Garbage Patch.

Overall, climate change continues to grow with no end in sight. Many steps need to be implemented not only individually, but also across the nation. Together, the effects of climate change can be lessened.

Personally, I find eco-friendly living to be vital to the world. I’ve been doing my best to conserve and reduce waste as much as possible. Simply, buying bamboo products instead of plastic (bamboo is biodegradable) helps landfill waste reduce.

Without changing our habits, I truly believe that climate change will only continue to increase. Before we know it, pollution will overtake our major cities, even more than they already do. Just with the COVID-19 crisis, pollution has decreased and waters have become clear again. If we choose to make better choices when it comes to waste and pollution, the world will be so much healthier.

How to Live a More Eco-Friendly Lifestyle