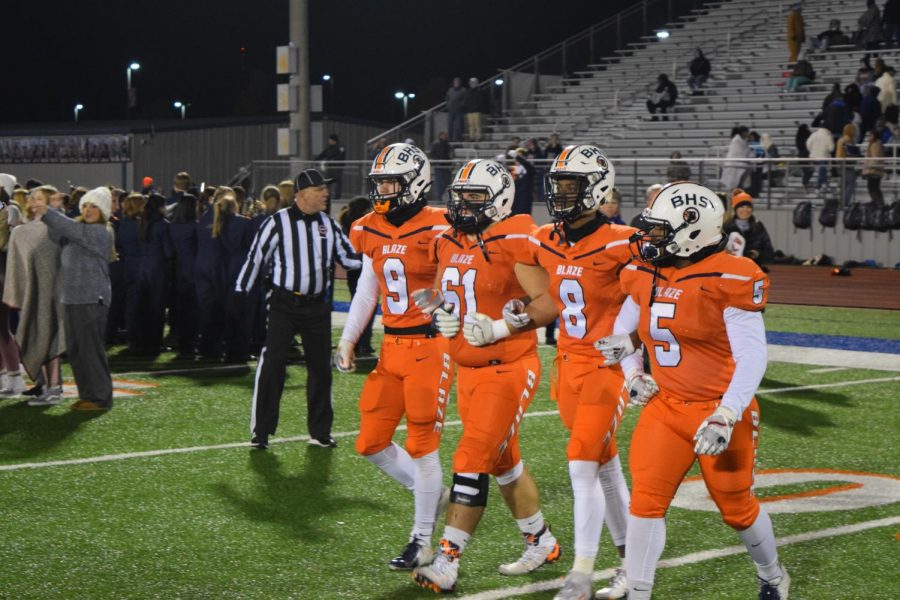 The TSSAA class 6A football playoffs ended on Saturday with state power Maryville winning their 17th state championship defeating Ravenwood by a score of 42-21 in Cookeville. The playoffs were mainly chalk in 2019 with many usual suspects making it to the final rounds. Therefore, it was no surprise to see the Blackman Blaze get to the quarterfinals.

After Wilson Central went three-and-out on their first possession, senior wide receiver Keionte Newson ran in a 12 touchdown out of the wildcat formation to give the Blaze an early 7-0 lead. The Blaze didn’t waste time putting the ball in the endzone once again as senior running back Antonio Malone evaded his way through the defense for a 37-yard touchdown with 6:22 left in the first quarter making the score 14-0. The Blaze kept a 14-0 lead through halftime.

Blackman added three more points on the board with a 41-yard field goal from senior kicker Tripp Holloway with 3:35 left in the 3rd quarter making the score 17-0. Wilson Central had an opportunity to break the shutout with 8:23 left in the game but the 36-yard field goal was no good. The Blaze would add to the scoreboard one more time from a 3-yard touchdown run from Newson for his second rushing touchdown of the night. This made the score 24-0 with 3:02 left in the game.

The score would remain 24-0 for the remainder of the game giving the Blaze the shutout. Getting a shutout always gives the defense confidence and momentum going into the next game. Blackman was one of four teams in 6A to get a shutout in the first round along with Maryville, Oakland, and Ravenwood. Those were all teams who made the semifinals.

The Blaze hit the road for their second-round matchup against the Hendersonville Commandos. Hendersonville entered the playoffs with a record of 5-5 but still managed to finish in first place in region four. Therefore, Hendersonville would surely not be an easy opponent.

The score remained 21-7 Blackman through the 3rd quarter. The 2nd half scoring finally opened with a 10-yard touchdown run by Hendersonville quarterback Drew Hohenbrink to cut the Blaze lead to 21-14 with 9:51 left in the game. The Commandos were once again driving this time to tie the game when Newson picked up a loose fumble and returned it 45 yards for a touchdown sealing the 28-14 victory for the Blaze.

It was once again a great defensive performance for the Blaze only allowing two touchdowns. The defense was also responsible for a touchdown which is always a bonus. This win also secured the first quarterfinal appearance for Blackman since 2016.

For the quarterfinals, The Blaze would have to face their nemesis of recent years, the Oakland Patriots. The defending state champions came into the game undefeated having another dominant season. This game was also a rematch as the Patriots won 40-0 at The Inferno in a blowout. The Blaze were obviously hoping for a better showing this time around.

The Patriots cashed in on their opening possession with a 1–yard touchdown run from quarterback Kody Sparks with 7:55 left in the 1st quarter to make the score 7-0. The defense held strong for most of the remainder of the 1st half until Oakland running back Victor Stephenson punched in a 2–yard touchdown with :21 left in the 1st half making the score 14-0. On the ensuing kickoff the Blaze had a costly turnover giving the Patriots the ball on the 8-yard line allowing them to put three more points on the scoreboard before halftime making the score 17-0 at halftime.

The momentum continued to not go the way of the Blaze as Oakland put two more touchdowns on the board before the 3rd quarter ended making the score 31-0. Blackman was able to score two garbage time touchdowns in the 4th quarter to make the score more respectable. This made the final score Oakland 31, Blackman 14.

Although the Blaze came up short, they had a much better showing than the first time around. Anytime you make the state quarterfinals, it’s a successful season. Therefore, the Blaze should be proud of a great season and keep their heads held high.