The Blaze Stop the Chop 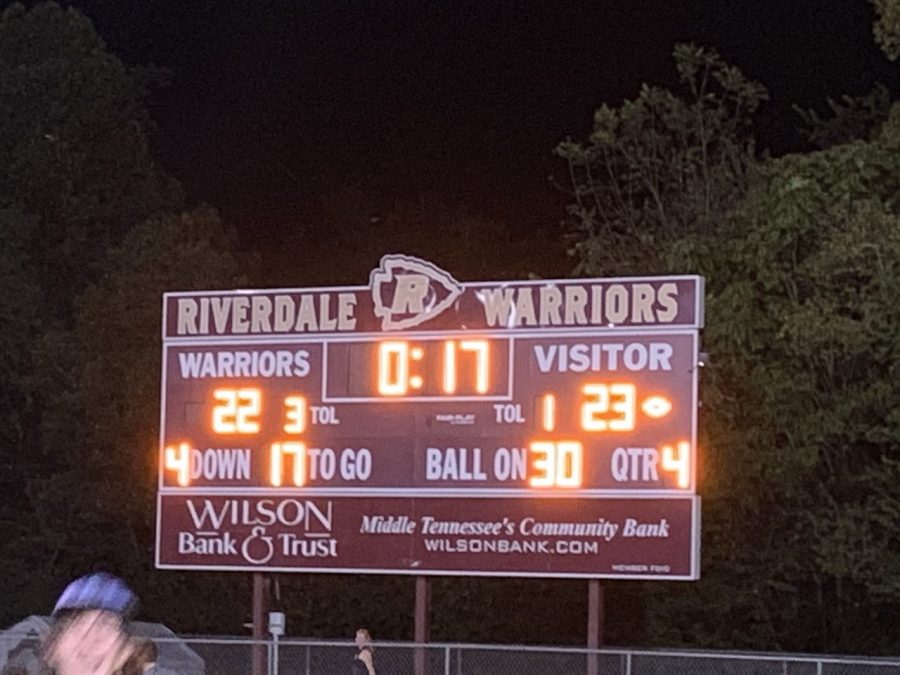 The Blackman Blaze had an improbable come-from-behind victory at Tomahawk Stadium over the Riverdale Warriors last Friday night.

Despite the discrepancy in those stats, Blackman also entered the game having won eight in a row over the Warriors, in the series known locally as “The Backyard Brawl.”

The scoring started with a 25-yard touchdown run on 4th and 2 by Riverdale quarterback Taylor Yancey, making the score 6-0 Warriors with 4:31 left in the first quarter. This score came off a Blackman interception.

The ensuing possession Blackman gave the ball right back to the Warriors throwing another interception, returned 38 yards for a touchdown by cornerback Josh Harney, making the score 13-0 Warriors with 2:24 left in the first quarter.

The mistakes could not have been much worse for the Blaze as the score remained 13-0 at the end of the first quarter.

The second quarter was a little bit better for the Blaze as they got on the scoreboard with a 24-yard field goal by senior Tripp Holloway, cutting the Warrior lead to 13-3 with 11:18 left in the second quarter.

Riverdale answered back with a 36-yard field goal by Caleb Moore. With 4:39 left in the second quarter, the Warriors led 16-3. Blackman was unable to answer back before halftime.

As the Warriors and Blaze headed to the locker room, the score remained 16-3 Riverdale.

The third quarter did not offer many exciting plays until Riverdale wide receiver Mackey Bonds caught a 19- yard touchdown to make the score 22-3 Warriors, with only 2:36 left in the third quarter.

Hope seemed lost for the Blaze at this point. Blackman kept fighting, however, as senior wide receiver Keionte Newson caught a 23-yard touchdown with 0:52 left in the third quarter. The Warrior lead was cut to 22-10 with a quarter of play left in the Backyard Brawl.

Blackman got a huge interception at the beginning of the fourth quarter from senior linebacker Jaden Layne.

Blackman took advantage of this turnover with Newson getting his second touchdown of the night on a two-yard touchdown run.

With only 10:01 left on the clock, the Warriors margin was cut, with Riverdale leading 22-17, less than a touchdown. Blackman’s next drive ended with a turnover on downs. The Blaze would get one last drive that they would not waste.

Down by five, the Blaze needed a touchdown to win. One of the key plays of their last drive was a diving one-handed catch by Newson to put the ball on the Riverdale 22.

“They originally called a go [route], but the safety was playing over the top. So, I broke inside, and Drew [Beam] kinda led me a little too far. I felt a guy on my hip, so I just stuck my hand out and made the play,” said Newson.

After some loss of yards, the Blaze were faced with a 4th and 17 from the Riverdale 30.

Blaze junior quarterback Drew Beam was forced to scramble and found senior wide receiver Emilio Martin for in the endzone for a touchdown with 17 seconds left in the game. This gave the Blaze a lead they would never relinquish, making the final score Blackman 23, Riverdale 22.

“The corner backed up and brought the linebacker on top of me. After that, I knew it was over because they were zone turning the whole night, which means they were looking back at the quarterback, not me. I ran a post, but when I saw the linebacker turn his head to Drew [Beam], I snapped out to the sideline because he couldn’t see me anymore. As soon as I saw Drew look at me, I knew it was over, and I reached for the pylon and scored,” stated Martin.

Coming back from a 22-3 deficit with little time in the game showed the character of this football team. They will have to continue to play with that kind of character against rival and state power the Oakland Patriots tonight at The Inferno.

“We just have to stay together and play as one, and we have just as good of a shot as anybody,” said Beam about the Blaze’s opportunity to topple the Patriots.

The Patriots will be a tough challenge, no doubt. But if the Blaze can limit turnovers, play as a team, and capitalize on mistakes, the Patriots might be in for a rude awakening.

The game kicks off at 7 p.m. at Bart Smith Field at the Inferno.