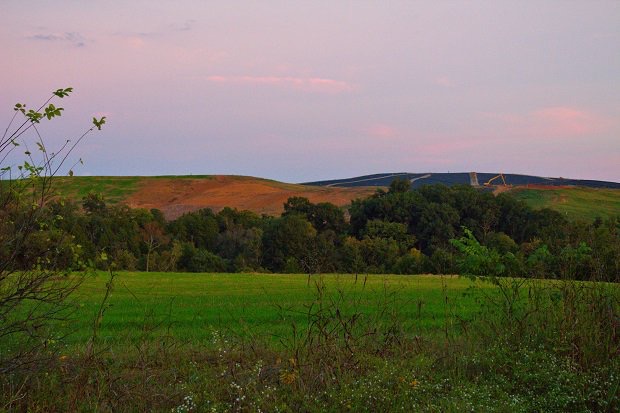 This is the middle point landfill located in Rutherford County. It will be closing periodically due to the growing waste that it cannot hold.

The lack of recycling in Rutherford County is an immense problem. The act of recycling may seem burdensome and time consuming, but it is one small action that can positively affect the entire community. If people don’t start taking small steps to recycle, compost, or reduce their output of trash, the landfill cost will continue to grow, which citizens and the county shouldn’t have to pay for.

The Monday before each third Saturday, the Middle Point landfill will be closed in Rutherford County because of the cost it takes to maintain. This will be effective April 21st through October.

Recycling communities are accessible through the Rutherford County Recycling Center. This center accepts anything from cans and bottles to even electronics. This not only makes the environment cleaner, but also lowers the growing cost it takes to keep the landfill open.

This landfill is expected to reach capacity within six years according to Nashville Public Radio. This brief time frame will become a reality before we realize it. It is evident that actions need to be enforced to encourage recycling.

There are currently fourteen convenience centers throughout Rutherford county which is where you can take your recycling. Since the Middle Point landfill accepts trash from nineteen counties, the immense number of recycling centers in diverse locations keeps recycling convenient.

Between 2010 and 2017, Rutherford County increased in population by twenty percent, according to Nashville Public Radio. With a growth of population, results in more trash and less people recycling. If people were to commit to a consistent schedule of taking recycling to public centers’ bins, then the trash levels would decrease.

Rutherford County currently has no plans to solve this issue. A possible solution would be using a waste-to-energy facility, but this is expensive and requires more waste than we produce. Another solution would be to ship waste to other counties, but according to the Daily News Journal, many people are opposed to this idea.

“Recycling positively affects the school in many ways, like teaching students how to be responsible and teaches us to not waste. Also, it keeps the school cleaner,” said Ava Palmer, sophomore.

Palmer is an advocate of recycling because she recycles frequently for Key Club. She believes that recycling should be emphasized at Blackman High.

“I have heard about the landfill closing, and it is honestly kind of sad. If more people would recycle what can be recycled, then we wouldn’t waste space in the landfill which is causing it to shut down,” said Palmer.

With the landfill continuing to grow and people not taking steps to prevent it from happening, trash will need another place to go. The county isn’t sure of any solutions now, so recycling needs more support.

“I hope recycling at the school makes students recycle now and continue to recycle later in life, in order to make it a life-long habit,” stated Mrs. Hamby, math teacher.

Students hopefully have made recycling a habit, so that in the future, they will commit to recycling. Recycling at the school has encouraged students to prioritize taking care of the environment.

“I tell my students to use the recycle bin instead of the trash, and tell them the waste that can be recycled,” Hamby said.

By informing students of what can be recycled, Mrs. Hamby is making students aware of the amount of waste that doesn’t have to go in the trash.

“I have heard about the landfill closing, and I do feel like there are things our society needs to do to save the Earth I think continuing to throw things in the dump isn’t a good idea,” stated Hamby.

There aren’t any perfect solutions to keep the landfill from closing for good because it will eventually reach capacity. Rutherford County already accepts trash from New York, so this adds to the problem. It ultimately comes down to recycling. It will benefit both our county and the world around us.

“I think recycling pickup within neighborhoods is a good encouragement for recycling,” said Hamby.

This is an easy action our community could take in order to keep track of recycling. Bins could be collected off the street which would add to the convenience.

“Recyling is first and foremost designed to reduce the amount of trash going into Mt. Trashmore on a daily basis, but it is also an exercise in caring for our environment. Reinforcing that littering and haphazard disposal of waste is not good for the overall future of our world, and also teaching students to just be more caring,” said Mrs. Giacobbi, AP Human Geography teacher.

Giacobbi explained that by students learning to care for the environment, recycling is reinforced which can help reduce the amount of trash going into the landfill.

“I have multiple recycling bins in my classroom, along with poptop collection. We talk about waste disposal as part of the curriculum in AP Human Geography,” said Giacobbi.

“Middle Point Landfill accepts on average of 3700 tons of trash every day from RUCO and 18 surrounding counties. At is current rate of disposal, it will reach capacity in 2025, if not sooner. If a solution is not found RUCO will lose money from disposal fees and will have to pay to dispose of waste. This will be a big hit to taxpayers,” said Giacobbi.

Giacobbi explains that the closing of the landfill isn’t a problem we can ignore. With it reaching capacity within the next decade, our county needs to start taking actions to reduce waste and encourage citizens to do the same. Another issue that arises is money; taxpayers will end up having to pay for the waste issue which isn’t something citizens are going to want to do.

“Rutherford county needs to implement a full-scale effort to reduce the amount of trash going to the landfill through the use of mandatory county led recycling programs which will collect cans weekly, instead of citizens paying for recycling through private companies only if they choose to. Increase the use of composting technology and sites to handle food wastes, and consider energy producing technology like trash to steam,” stated Giacobbi.

Giacobbi presents a list of solutions that can be implemented into our county. If bins became accessible for everyone, then people would be more likely to make recycling part of their daily routine. Composting is another simple way that could be an easy addition to people’s lifestyles. Clearly, steps need to be taken to create a solution for this growing issue.

Until other solutions arise on how to deal with the landfill, recycling is the simplest action people can take to assist this problem.